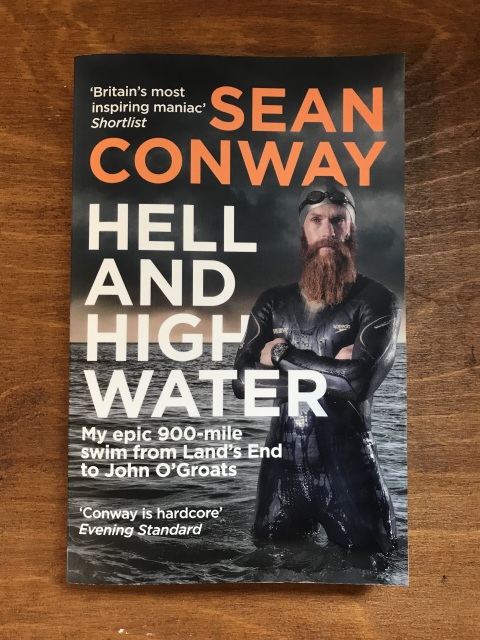 Rain pelted down on the back of my neck and saltwater rushed down my throat as I tried to breathe into a wave. A foghorn started booming from a lighthouse in the distance. For a moment I thought it was a rescue siren for me. Imagine if I got rescued on day two. That would be embarrassing.

In June 2013 Sean Conway set out from Land’s End in his bid to be the first person to swim the length of Britain. It was a challenge so extreme that not only had it never been attempted before, but most of the sponsors Sean approached turned him down as they were worried that he would die trying.

Landlocked Cheltenham – Sean’s hometown – isn’t really the ideal place to train for a long sea swim, and he only managed three miles in a local pool before setting off from Land's End. Once in the water Sean had to develop incredible mental strength to deal with the extreme cold and hours alone. He also needed to devise ways to take on the huge number of calories he needed to sustain him. On the support boat he and his three-man crew had to cope with storms, seasickness and living in close proximity for months. After taking a few jellyfish stings to the face, Sean decided to grow a huge beard to protect himself.

The physical challenge was gruelling, but came with unexpected rewards. Sean swam with dolphins and seals and among stunning night-time phosphorescence. He had a unique view of the British coast, discovering tiny hidden coves and exploring shipwrecks. When there were problems with the support boat, Sean and his crew met many kindly people who were willing to come to their aid.

From the first person to complete a British 'triathlon' - running, swimming and biking the length of Britain - this is Sean's remarkable and funny story about how anything is possible if you truly put your mind to it.